Many governments and other well-resourced actors around the world implement some form of censorship to assert control over the flow of information on the Internet, either because it is deemed “sensitive” or because it is inconvenient for those with power.

Suppose there is some adversary, Eve, that wants to prevent users from accessing some content. There are many ways of implementing such censorship but they broadly fall into one of two categories: endpoint-based or flow-fingerprinting attacks.

A user attempting to access censored material through an adversarial Internet service provider.

Eve could maintain a list of banned services and refuse to serve any network request she receives if it is on this list. Here Eve is deciding based on the destination of the request: this is endpoint-based censorship. In response a user, Alice, could use a VPN or TOR to disguise the destination so that from Eve’s perspective, the destination will appear to be the VPN server or the TOR entry node instead of the censored service.

This is a working solution in many places, but Eve is not beaten. In response she can add the IP addresses of known VPN providers as well as public TOR nodes to her blocklist, reasoning that only a user who wants to bypass her blocking efforts would use these services. Alice could then setup her own VPN server or access the TOR network through a non-public TOR bridge that is not blocked.

Eve could actively probe the servers that Alice connects to in order to find out if they are TOR entry nodes, for example, but apart from this she has stretched endpoint-based censorship to its limits. An alternative is to censor a connection based on characteristics of the network flow instead of its destination: this is flow-fingerprinting. This is usually accomplished using some kind of deep packet inspection engine that can detect and group traffic into protocols and applications. With this capability Eve can block any traffic that is detected as a proxy regardless of whether any particular server is known. 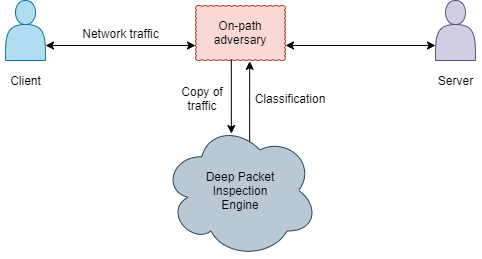 An adversary using a deep packet inspection engine to decide whether to censor traffic.

To bypass this technique, Alice must disguise the fingerprint of her traffic so that a DPI engine does not classify it as a blocked protocol or application. There are a few approaches to this:

An important metric to consider is the false positive detection rate associated with each method. This is the proportion of traffic that a DPI engine falsely detects as coming from an obfuscation tool. A high false-positive rate results in lots of innocent traffic being blocked which will cause frustration for ordinary users. Therefore the goal of an obfuscator should be to look as much like innocent traffic as possible to maximise the “collateral damage” of any attempted censorship. Overall, it seems like tunnelling is the best approach.

This brings us to Rosen, a modular, tunnelling proxy that I have developed as part of my ongoing masters thesis. It currently only implements HTTPS as a cover protocol, but this has been tested against nDPI and a commercial DPI engine developed by Palo Alto Networks, both of which detected TOR traffic encapsulated by Rosen as ordinary HTTPS. The goals of Rosen are:

HTTPS was chosen as the first cover protocol to be implemented as it provides confidentiality, authenticity, and integrity; and it is ubiquitous on the Internet making it infeasible for an adversary to block. The implementation is provided by the Go standard library and most configuration options are set to their defaults so that it blends in with other applications. I was informed that censors are blocking ESNI specifically. The server will automatically provision a TLS certificate from LetsEncrypt and the client pins LetsEncrypt’s root by default.

It’s difficult to know how effective this truly is without further battle-testing by security researchers and users, but we can theorise to some extent.

If you have the capability to test out Rosen, especially if you are behind a firewall that implements censorship, I would greatly appreciate you telling me about about your experiences at my Email address (available on GitHub and on this website’s homepage). If you want to contribute, you can open an issue or pull request on the project’s GitHub page.